Kintaro, the man with an ax, riding a bear – Japanese folklore

It started with an old, worn sign: a fat man with a bad haircut holding an ax over his shoulder and riding a bear:

I couldn’t read the text but I could tell it wanted me not to do something (due to the cross-out circle on his chest). I didn’t know who he was, but in later months, I would think of him as “Japanese ax man”, or “man riding bear”, or “Japanese Paul Bunyan”.

His name is Kintarō 金太郎 (aka “Golden Boy”). On first glance I thought this was just another amusing, random Japanese street sign. I didn’t realize this is a popular character from Japanese folklore, based on a real person, Sakata Kintoki 坂田金時.

A few things I need to figure out:

From a picture book 絵本… 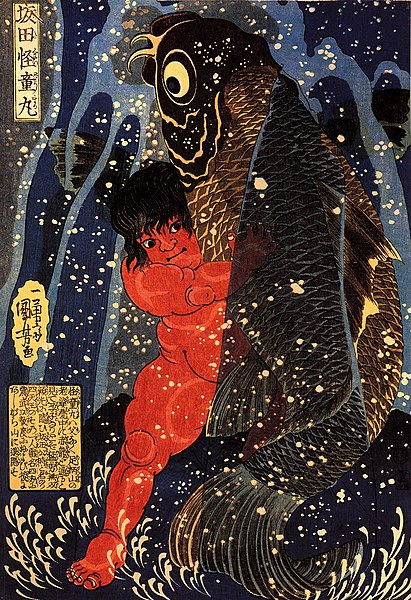 Kintaro as a scarecrow in the Inabuchi rice terraces 稲渕の棚田 of Asuka Village 明日香村, Nara:

Kintaro on Twitter (these examples were all posted in the span of just a few weeks in September, 2015):