I came across the “Pictorial Arrowhead Occupation of Japan by Second Marine Division”, which can be described as a “yearbook” commemorating the American occupation of Nagasaki following World War II. The preface explains:

“This pictorial booklet of the 2d Marine Division, Commanded by Major General LeRoy P. Hunt, USMC, has been published under the supervision of the Division Special Services Section with the assistance of the Division Photographic and Reproduction Sections. Individual credit to Pfc. Leo L. Wengert and Pfc. Herman E. Erke.”

The booklet is a strange artifact; it includes images of atomic destruction as well as photos of the daily life of occupying American forces.

A photo of Nagasaki’s destruction, along with a map of the landmarks seen in the photo. The photo is labelled “Valley of Death” for obvious reasons. 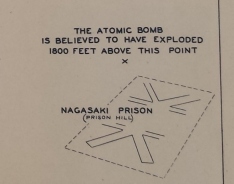 Includes a picture of a torii gate that survived the blast. 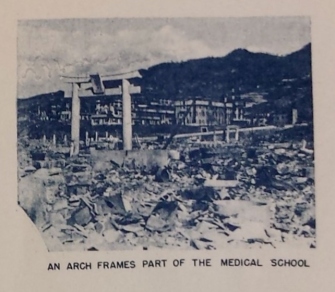 For reference, here is Bockscar, the airplane that dropped the bomb; notice the Disney-esque cartoon showing the plane’s route from Salt Lake City to Nagasaki (the plane was from Wendover Army Air Field, Utah). 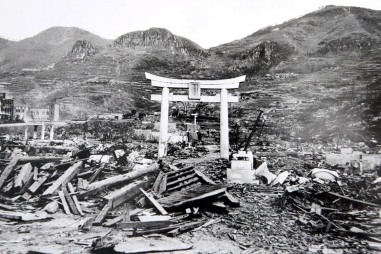 Mitsubishi factory and Church of the Immaculate Conception: 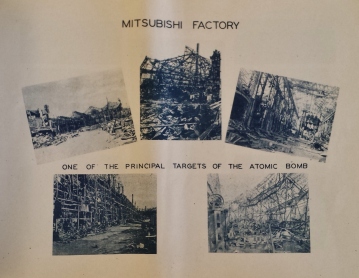 “The Marines arrived in Nagasaki in September…six weeks after the 22-kiloton plutonium fission bomb detonated over Nagasaki on Aug. 9, 1945.” (The New York Times)

American soldiers in Kyushu were surprised that the occupation was not met with resistance:

“Schmidt’s forces were amazed at what they encountered. “We couldn’t believe the Japanese could previously fight so ferociously and then be so completely subservient, without a murmur,” Brigadier General Joseph L. Stewart later recalled. “Not once did I see any Japanese who acted or looked with disrespect toward occupation forces . . . . We were overwhelmingly surprised by the cooperative reception we had from the Japanese.” (Source)

This may be propaganda, but there’s a heartwarming picture of an American serviceman surrounded by relatively happy-looking Japanese boys. 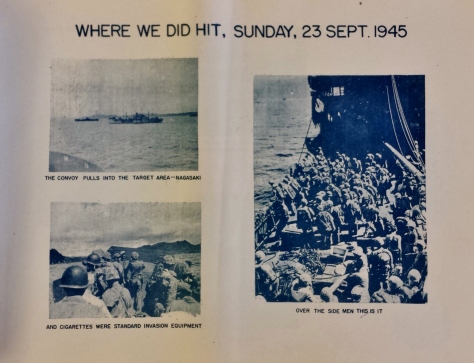 The American servicemen were given some time for R&R. They visited tea-houses, watching sumo, and played sports, including the indelicately titled “Atomic Bowl” on New Year’s Day, 1946. Two decent accounts of this game are here:

Two interesting tidbits from the Times article on the Atomic Bowl:

“A few curious Japanese watched from a distance or from behind the shells of scorched buildings that ringed the post-apocalyptic field, according to news accounts.”

“The possibility of exposure to radiation apparently caused little if any alarm on either sideline, but because shards of glass littered the field, it was decided that the game would be two-hand touch below the belt instead of tackle. Fifteen yards, instead of the standard 10, would be necessary for a first down.”

More pictures from this publication can be found at: 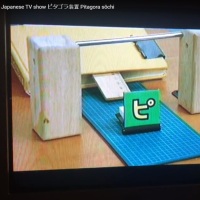